This page explains what the filtered-s-unit software does, and how to run the software.

This software is designed to focus on the simplest S-unit attack for which it is reasonable to conjecture that the attack breaks polynomial-approximation-factor Ideal-SVP in subexponential time. There are four major aspects of this simplification:

This attack thus allows the larger choices of y that appear in traditional number-theoretic S-unit searches. These searches are perhaps best known for their use inside the number-field sieve for integer factorization, but they have a much longer history as part of computing fundamental structural features of number fields, such as class groups and unit groups. See, e.g., [1993 Cohen, "A course in computational algebraic number theory", Chapter 6]. For numerical examples, see, e.g., [1875 Reuschle] and many results surveyed in [1993 Cohen, Appendix B].

The standard asymptotic analysis of S-unit searches begins with the following smoothness theorem. Fix a positive real number c. If y is exp((c+o(1)) sqrt(log x log log x)) as x → ∞, then a uniform random integer between 1 and x has probability 1/exp((1/2c+o(1)) sqrt(log x log log x)) of being y-smooth. Beyond finding one y-smooth integer, the literature normally asks for a large enough database of y-smooth integers to guarantee multiplicative relations among the integers, i.e., y^(1+o(1)) integers that are y-smooth; finding these takes, on average, exp((c+1/2c+o(1)) sqrt(log x log log x)) independent trials. See, e.g., [1993 Buhler–Lenstra–Pomerance, "Factoring integers with the number field sieve", Theorem 10.1]. Typically c is chosen as 1/sqrt(2) to minimize c+1/2c as sqrt(2), although the literature also considers other possibilities to change the balance between an S-unit search and other algorithm stages.

The standard analysis continues by asking how large the norms are of the ring elements that one would like to be S-units, and defining x accordingly. The norm size (and thus the definition of x) depends on the field and on how elements are constructed; typically the exp(O(sqrt(log x log log x))) above turns into something between exp((log Delta)^(1/3+o(1))) and exp((log Delta)^(2/3+o(1))), where Delta is the field discriminant. For example, it turns into exp(O(sqrt(log N log log N))) for the quadratic sieve and exp(O((log N)^(1/3) (log log N)^(2/3))) for the number-field sieve, where N is the integer being factored; see [1993 Buhler–Lenstra–Pomerance]. For further illustrations, see [2014 Biasse–Fieker, "Subexponential class group and unit group computation in large degree number fields"].

Consider, for example, small elements of the pth cyclotomic ring Z[ζ], where p is prime. There are binomial(p,w) weight-w sums of distinct powers of ζ. Any such sum has absolute value at most w in each complex embedding (almost always smaller, but let's skip this improvement in the analysis), so the absolute value of its norm is at most w^(p-1). Assume that w is p^(1/2+o(1)), and abbreviate w^(p-1) as x. Then x is p^((1/2+o(1))p), so (sqrt(2)+o(1)) sqrt(log x log log x), the log of the number of trials mentioned above, is (1+o(1)) sqrt(p) log p. The log of binomial(p,w) crosses above this (via bounds on the error in Stirling's approximation or in the simpler approximation (p/w)^w) as w crosses above (2+o(1)) sqrt(p), meeting the assumption that w is p^(1/2+o(1)). In terms of Delta = p^(p-2), the absolute value of the discriminant of the field, the number of trials mentioned above is exp((1+o(1)) sqrt(log Delta log log Delta)), and the size of the database of integers mentioned above is exp((1/2+o(1)) sqrt(log Delta log log Delta)).

The standard analysis continues by applying a common heuristic stating that "the auxiliary numbers that 'would be smooth' are just as likely to be smooth as random integers of the same approximate magnitude", in the words of [1993 Buhler–Lenstra–Pomerance, Section 10]. More precisely, the chance of a uniform random integer between 1 and x being y-smooth is used as an approximation to the chance that a ring element α (generated in the specified way) has y-smooth norm; and, more to the point, to the chance that α is an S-unit, where S is defined as the finite places of norm at most y together with the infinite places. (A non-S-unit can have y-smooth norm, but only from places of degree at least 2 with norm above y. These places do not appear frequently enough to affect the heuristic at the o(1) level of detail.) See, e.g., [1990 Buchmann, "A subexponential algorithm for the determination of class groups and regulators of algebraic number fields", page 10, "smoothness assumption"]; [1993 Buhler–Lenstra–Pomerance, Section 11, last paragraph]; and [2014 Biasse–Fieker, Heuristics 1 and 2].

Even if there are enough S-units, they could conspire to avoid spanning the S-unit lattice in class-group computations, or to avoid generating nontrivial factorizations in the number-field sieve, or to reduce poorly in the context of S-unit attacks against Ideal-SVP. As commented in [1992 Lenstra, "Algorithms in algebraic number theory"]:

The analysis of many algorithms related to algebraic number fields seriously challenges our theoretical understanding, and one is often forced to argue on the basis of heuristic assumptions that are formulated for the occasion. It is considered a relief when one runs into a standard conjecture such as the generalized Riemann hypothesis (as in [6, 15]) or Leopoldt's conjecture on the nonvanishing of the p-adic regulator [60].

It is essential to compare conjectured algorithm performance to experiments. For S-unit searches, when (most of) the numbers that one is checking for smoothness grow as Delta^(d+o(1)) for a constant d (as in the weight-w cyclotomic search explained above), it is natural to express experimentally observed costs as powers of exp(sqrt(log Delta log log Delta)). Note that extrapolation requires care: one expects exponents to vary for small sizes as a result of the patterns that occur in small primes, small prime ideals, small norms, etc.; o(1) means something that converges to 0, and says nothing about the speed of this convergence.

Experimental data collected by the software

The filtered-s-unit software collects data regarding the tradeoffs between database size and output length for this attack against Ideal-SVP for various number fields. The database size is a major predictor of the cost of this attack: the gu/v search in this software takes time scaling quadratically with the database size, and it is reasonable to conjecture that the number of reduction steps is polynomial in the field degree.

This data collection includes extensive double-checks, such as the following:

This software is one part of a massive research project on S-unit attacks. The first talk on the project focused on the mth cyclotomic field for integers m that are powers of 2. This software instead uses the pth cyclotomic field for prime numbers p, to provide data for a much denser set of field degrees. The software speeds up this attack by accumulating the S-unit database modulo rotations (i.e., multiplications by roots of unity) and modulo field automorphisms. The software also measures the size of the database in this way, recording "dblen", the number of distinct uR modulo automorphisms, and "dblen2", the number of distinct u modulo rotations and automorphisms, where R is the ring and u runs through small S-units. Automorphisms are applied to each entry in the database when the entry is used; rotations are skipped, since they have no effect on height.

One should not interpret the cost of this software as a lower bound on the cost of computations in this attack. Speedups not in this software include, inter alia, subfield towers for norm computations; limiting the prime numbers used in smoothness tests for norms; batching smoothness tests across many norms; using a gcd tree to batch divisibility tests of many gu/I by many v; batching divisibility tests across many targets g; preprocessing the database to skip duplicate ratios u/v; fast matrix operations for height tests; and "compact representations" of field elements as products of powers of small ring elements (e.g., storing "(1+x+x^2)^1000000" rather than writing out the coefficients).

There are also many obvious opportunities for further parallelization and space reduction. Currently all small ring elements (not just S-units) are stored and sorted so as to provide a simple definition of what it means to take the first r ring elements, but it is better to take all ring elements up to a height boundary (using this boundary in place of r as an attack parameter) and filter them on the fly, skipping the sorting step. One can squeeze the attack into less and less space at the cost of repeatedly generating and filtering small ring elements; this is particularly attractive in multi-target attack scenarios.

Visualization of the results 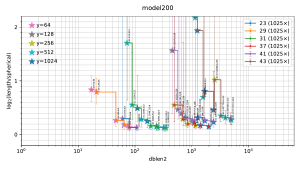 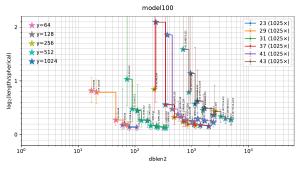 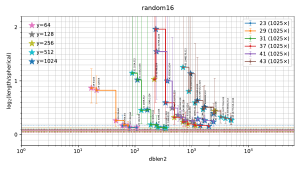 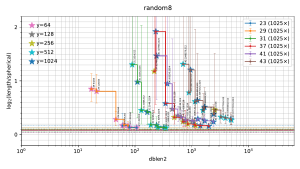 In each figure, the horizontal axis is the size of the database used by the attack, and the vertical axis is output length scaled as defined below. Each stair-step curve is for one p, considering various attack parameters (r,y) for the pth cyclotomic field. Each point on the curve shows the median (with error bars showing first and third quartiles) of experiments with one set of attack parameters (r,y). The legend on the top right of the plot indicates the number of experiments for each p. Each point also has a star with color indicating y; these colors are tabulated on the top left of the plot.

A point is automatically suppressed from the plot if its observed median is above the observed third quartile of a smaller database for the same field. One could, with more work, statistically estimate the Pareto front obtained by the best parameters (r,y). The plot also suppresses p small enough to have class number 1 (i.e., p < 23); the software does not randomize the input ideal in that case.

The plots for real attacks also indicate, as horizontal lines across the picture, the best results found by BKZ with high block size, presumably the minimum nonzero vector length (although this could conceivably be spoiled by the "pruning" typically used inside BKZ). The BKZ median is a solid line; the BKZ quartiles are dashed lines.

The criteria used for deciding how output length is scaled in the plot are as follows:

Lattice-based cryptography frequently appeals to the supposed hardness of cyclotomic Ideal-SVP with approximation factors that are polynomials in n. The hardness assumptions generally do not specify the exact polynomials, so if there is a sufficiently fast attack reaching, e.g., approximation factor 8n^1.5 then the hardness assumptions are incorrect. (Some theorems on this topic are stated only for polynomial-time attacks, but cryptographic proposals generally assume that lattice problems are exponentially hard with a particular exponent. See Appendix A of "Non-randomness of S-unit lattices".) From this perspective, reaching vertical positions as small as shown in the plot is massive overkill. The reason for focusing on such small vertical positions is that this is what is naturally reached by S-unit attacks with reasonable choices of y. See the discussion of phase transitions below.

Of course, what one wants is not merely for short S-generators to exist, but also to be able to find them. This is where the plot shows the importance of having a large enough database to cover enough directions in the space of S-units.

20GB free disk space. (This is mostly for installing Sage.)

Debian or Ubuntu. (Other modern Linux/BSD/UNIX systems should work with minor adjustments to the instructions.)

The filtered-s-unit software has been tested specifically with Sage 9.2. Download, unpack, and compile Sage 9.2, optionally changing 32 here to the number of cores on your computer:

(Various versions of Sage segfault on the following simple script:

Sage 9.2 appears to avoid this issue.)

Download, unpack, and run the latest version of filtered-s-unit:

This takes on the scale of 10000 core-hours, depending on the CPU. It produces attack.out, attack.err, and plot.pdf. Error messages "Warning: precision too low for generators, not given" from Pari via Sage are expected to appear in attack.err and have no effect on the output.